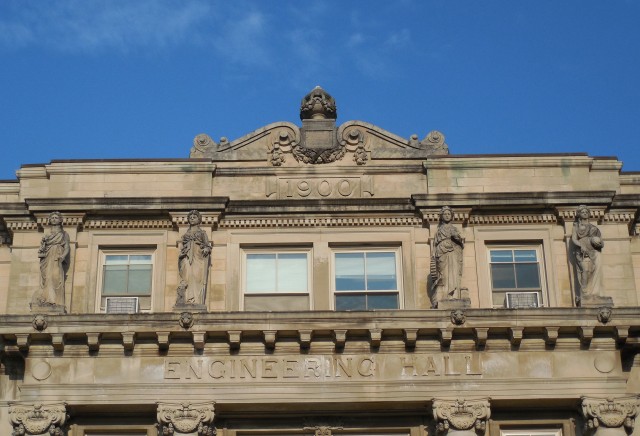 9.9.1. Detail of the upper Engineering Hall and Muses. 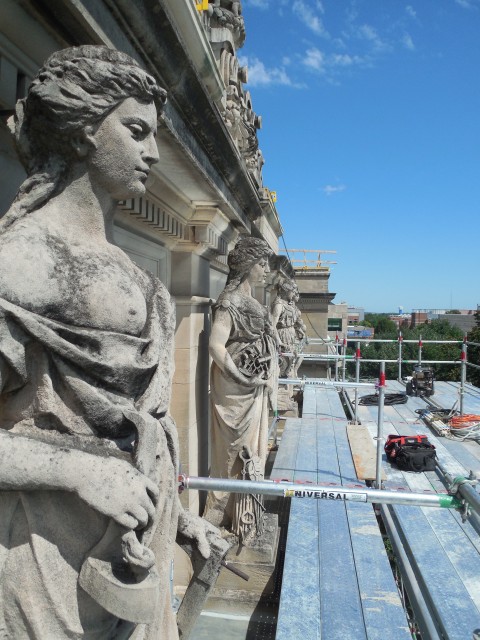 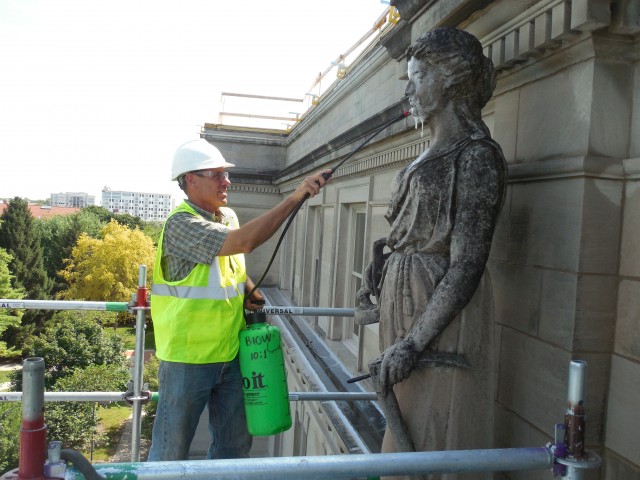 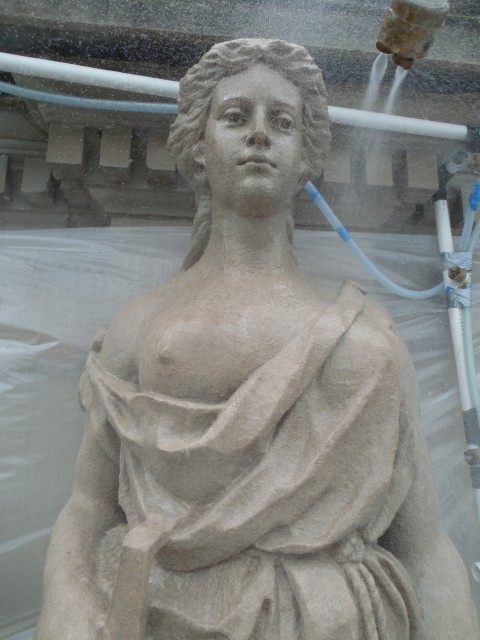 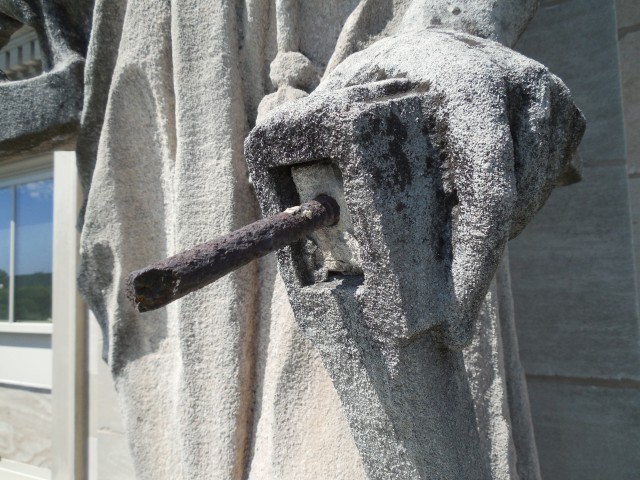 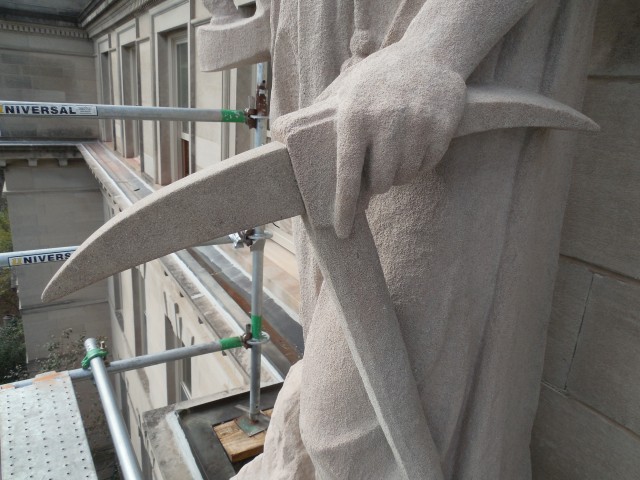 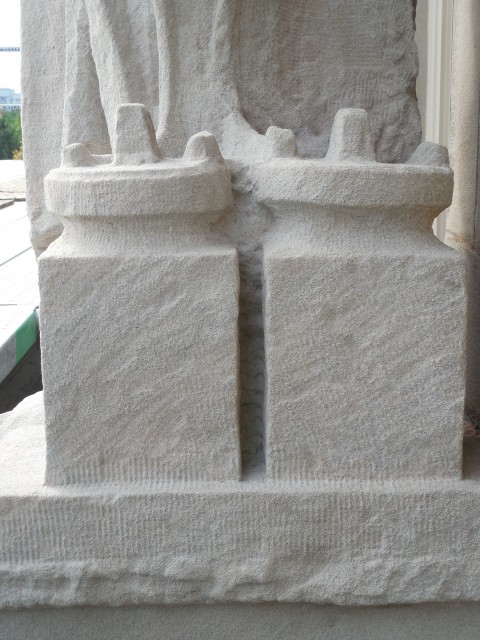 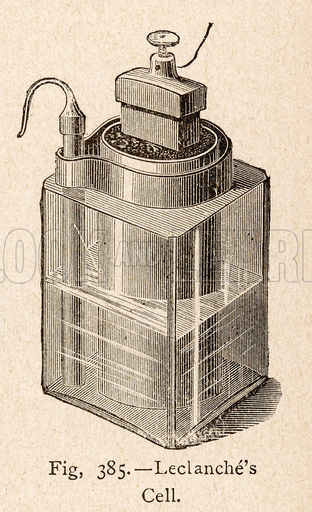 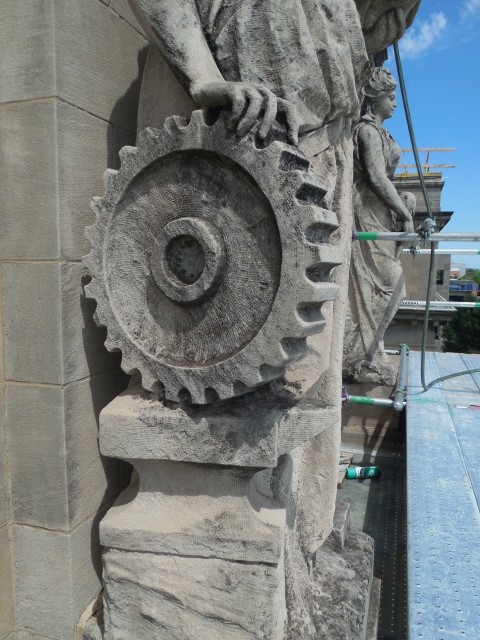 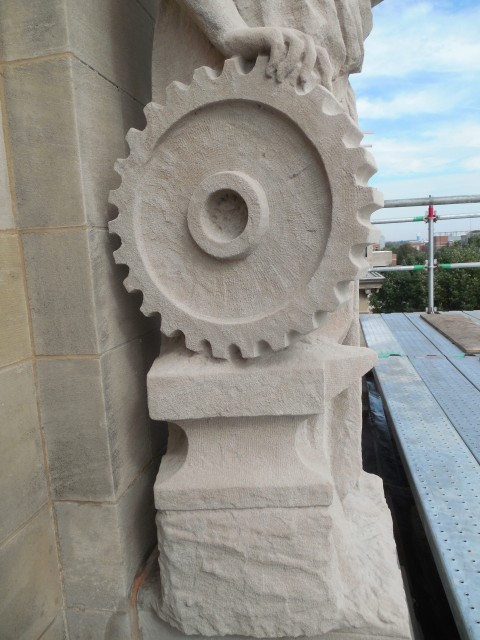 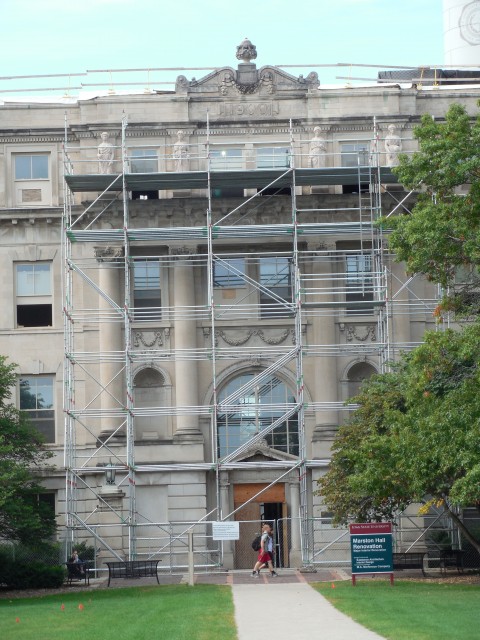 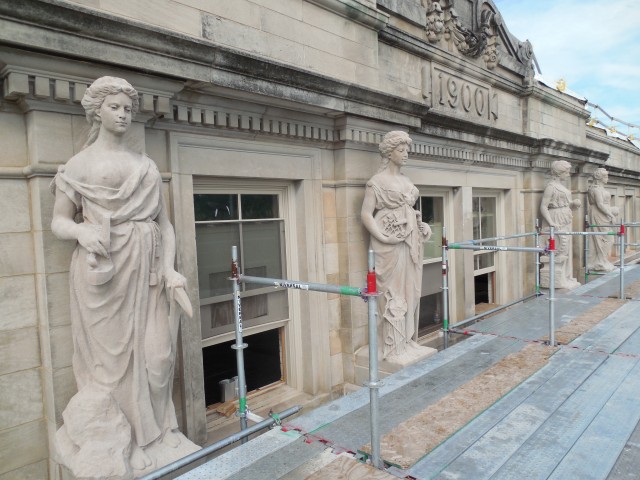 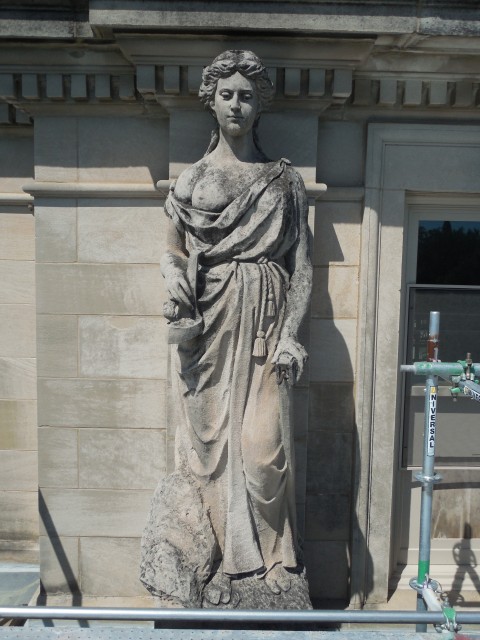 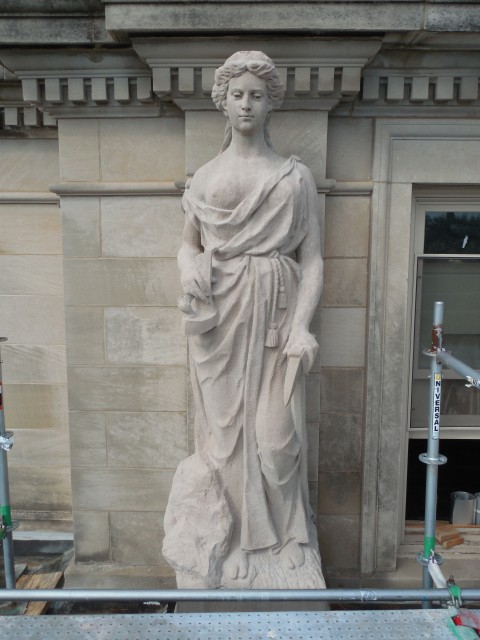 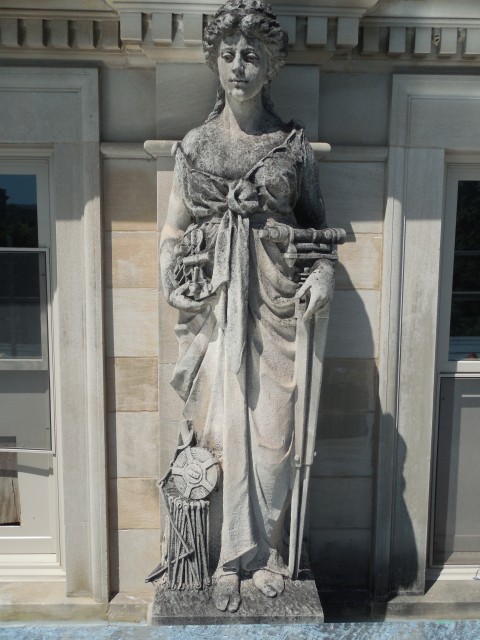 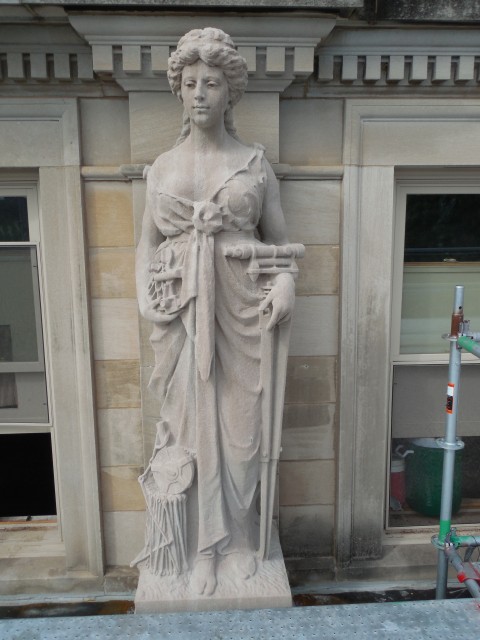 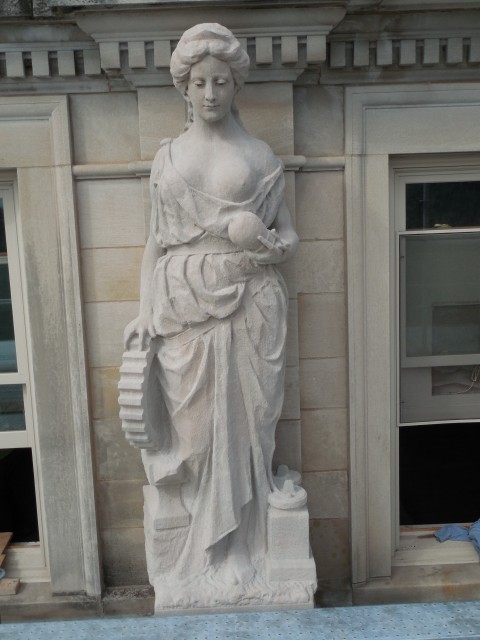 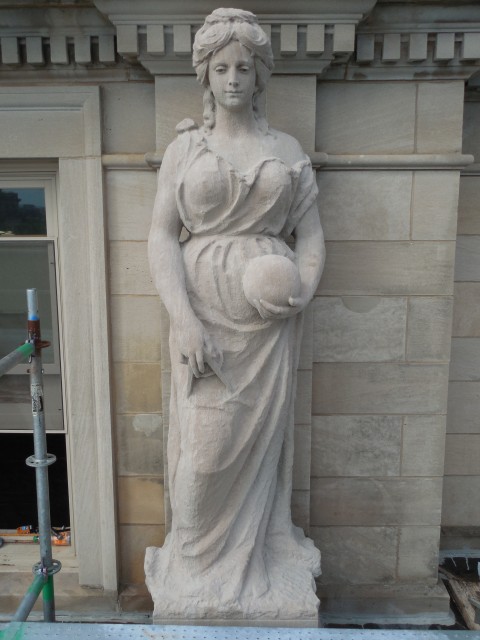 The 8 feet tall, Greco-Roman Marston Muses, atop the stately Engineering Building (1900), gaze over Iowa State University, Ames (ISU). The Indiana Limestone muses represent the major fields of engineering at ISU at the time of their creation: Mining, Civil, Mechanical and Electrical. Each Muse holds realistic representations of tools for each engineering profession, and has a uniquely real face, with a possible Art Nouveau influence, a deviation from most “classical” carvings. The building was designed by its current namesake, Anson Marston, a notable civil engineer, educator and dean at ISU. Inspiration for the building’s design came from Marston’s visit to the World’s Columbian Exposition in Chicago, 1893. Renamed Marston Hall in 1947, the four-story, Beaux-Arts building is listed on the National Register of Historic Places.

Marston profoundly helped shape the Iowa State University campus and its central 20 acre green with the design and construction of Curtis Hall, the Campaniles, the Engineering Building, and the notable 168 foot tall, steel Marston Water Tower constructed in 1897, also listed on the National Register of Historic Places. The graceful, curving rise of the Marston Water Tower beams seem to effortless support the 162,000 gallon tank, a possible tribute to the sweeping Eiffel Tower, 1889. The ISU campus was recognized as a “medallion site” by the American Society of Landscape Architects. Only three universities – Iowa State University, Yale University and the University of Virginia – were recognized with the honor for having  notable central greens.

The carved Muses symbolize inspiration for the engineering profession, a fitting symbol for Marston himself. In addition to architecture, Marston furthered sanitary and transportation engineering not only for the state, but nationally and internationally, including consultation on the Panama Canal. Marston’s leadership and knowledge of the civil engineering field lead to his positions as a director, vice-president and ultimately, president of the American Society of Civil Engineers. His devotion to education is evident by his continued contribution to Iowa State. Marston mentored undergraduate Elmina Wilson (BSCE, 1892), the first woman in the nation to receive a masters degree in civil engineering (1894), and to gain a full-time professorship in civil-structural engineering at an American university.

Little history is known of the Indiana Limestone carvings. Each figure was carved from a single block, with the exception of the pick-end on Mining, which was a separate attachment. Comprised of compressed and cemented shell fragments, the porous stone has lost much of the original detail. Likely due to decades of sulfur related exposure from the campus coal burning physical plant, the chemically sensitive cementing materials have dissolved much more rapidly than the shells, leaving the tan to pink fragments proud and unstable. In its current state, the loss of single shell grains can have detrimental impact on the existing design. The quarry left wood embedded into carved lifting keyways in the head-tops. Freeze-thaw cycles and wood swelling caused hairline cracks to radiate from the openings. The missing pick-end was attached with a mortise and tenon join, the tenon still embedded into the joint. Indiana limestone has a wide range of classes and associated strengths, but in general, has a fairly weak modulus of rupture and is not suitable for protruding elements such as the pick. Type II limestone has a modulus of rupture of about 3.5 MPa; where as marble is approximately 7 MPa and granite 10 MPa. Two, small, 316 grade stainless steel rods inserted through the tenon reinforced the replacement element.