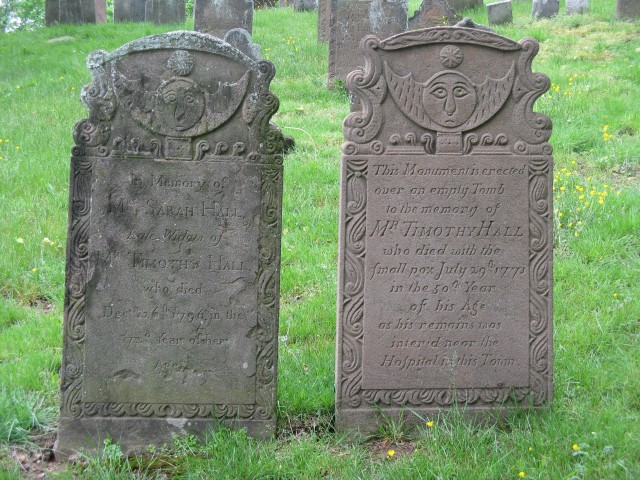 9.8.0 Timothy Hall, 1773. Cleaning with quaternary ammonium solution with no scrubbing. 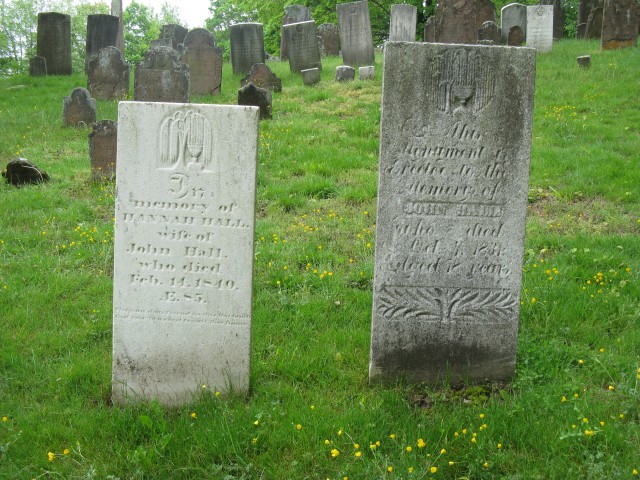 9.8.1 Hannah Hall, 1840. Cleaning with quaternary ammonium solution with no scrubbing. 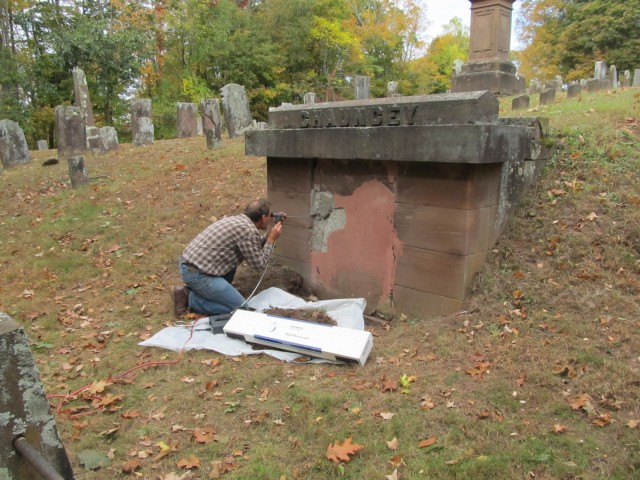 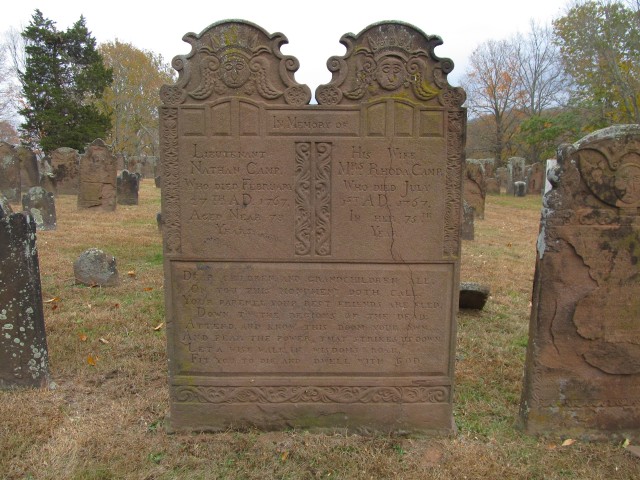 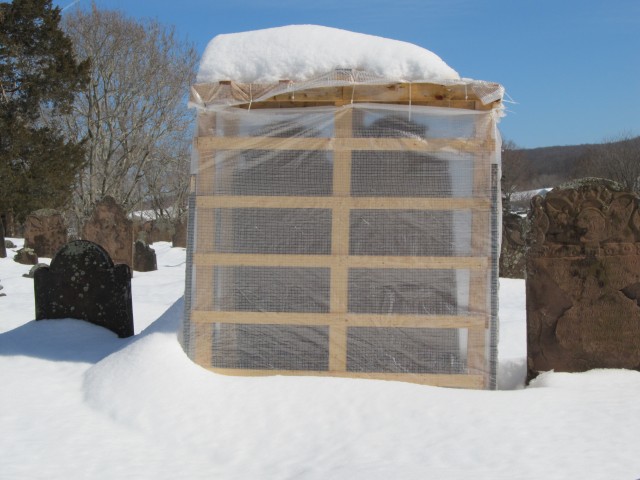 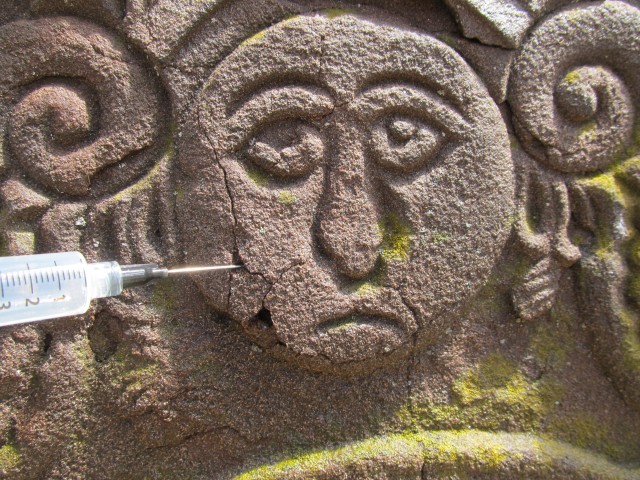 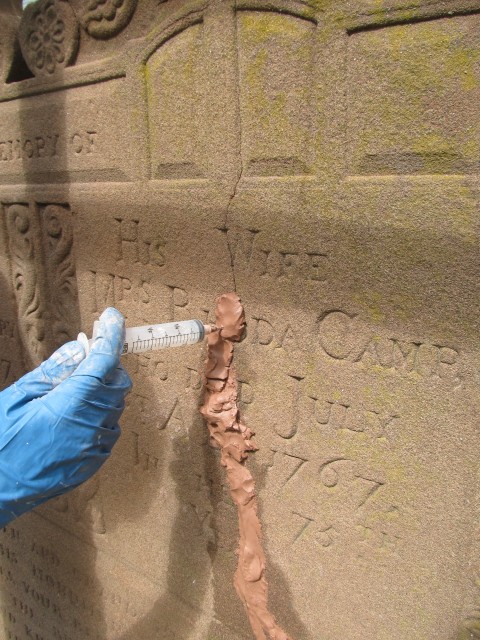 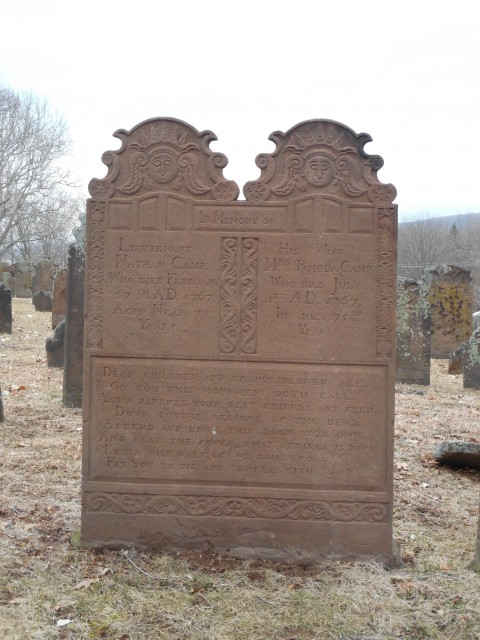 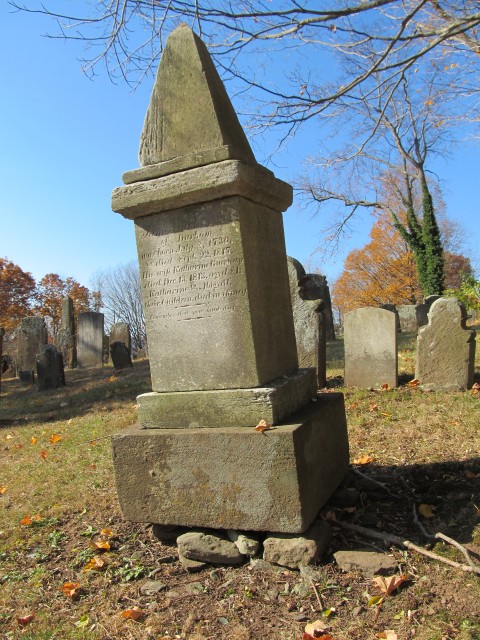 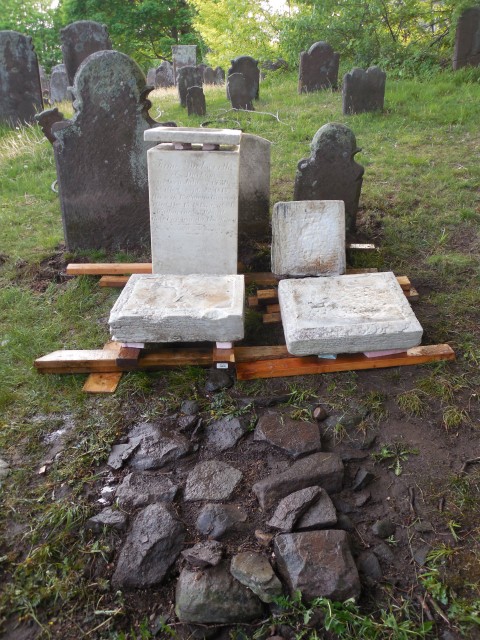 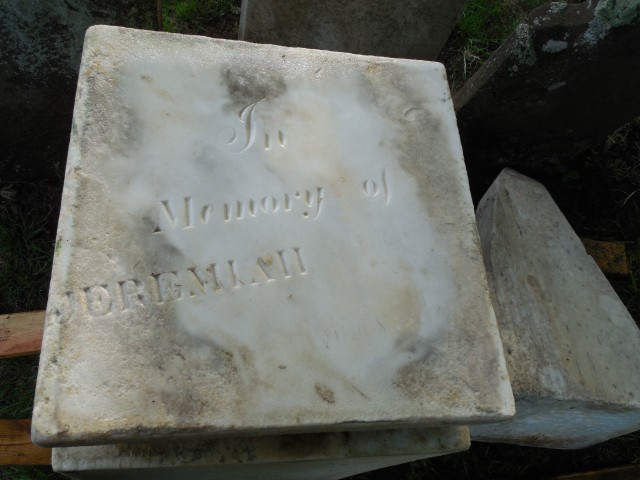 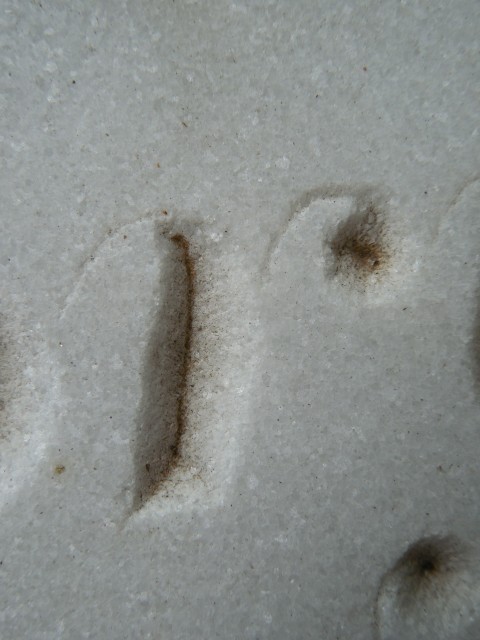 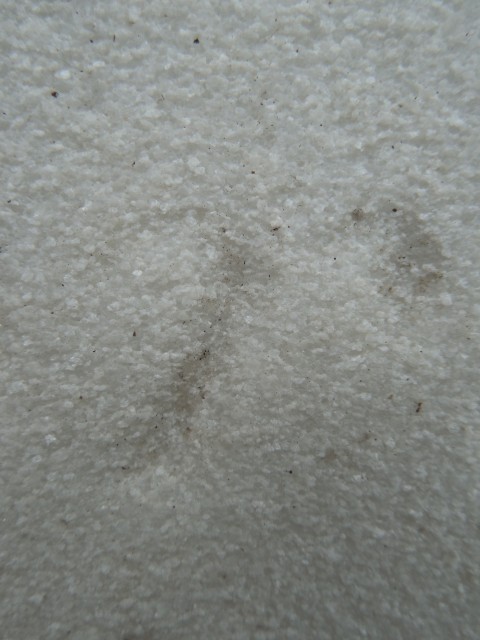 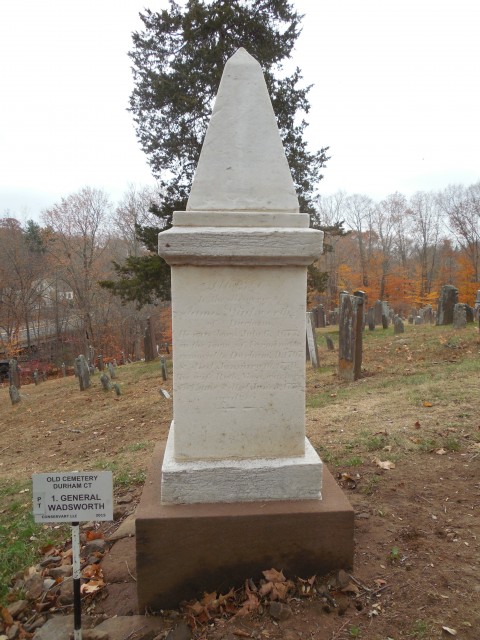 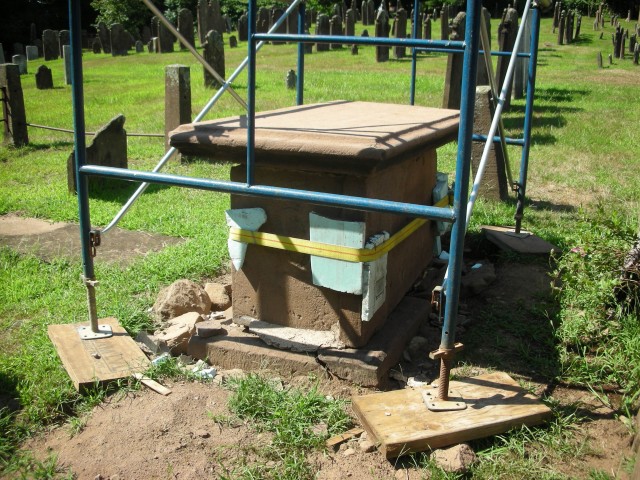 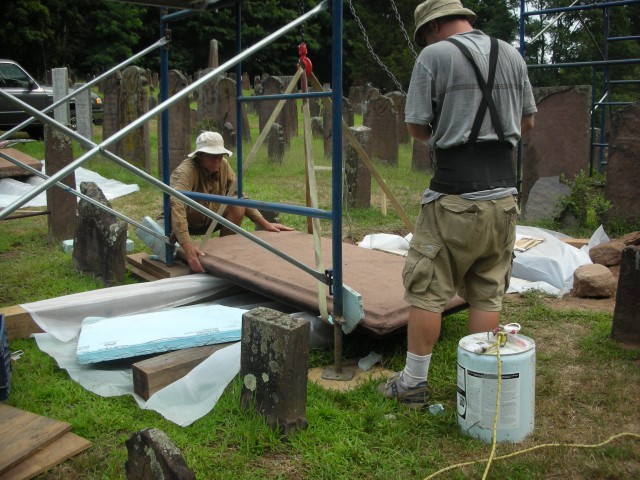 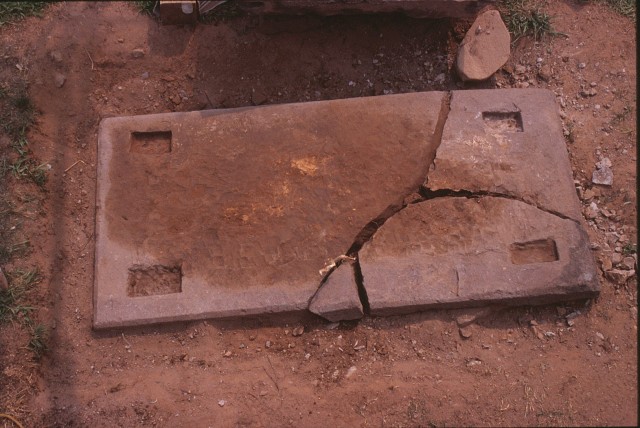 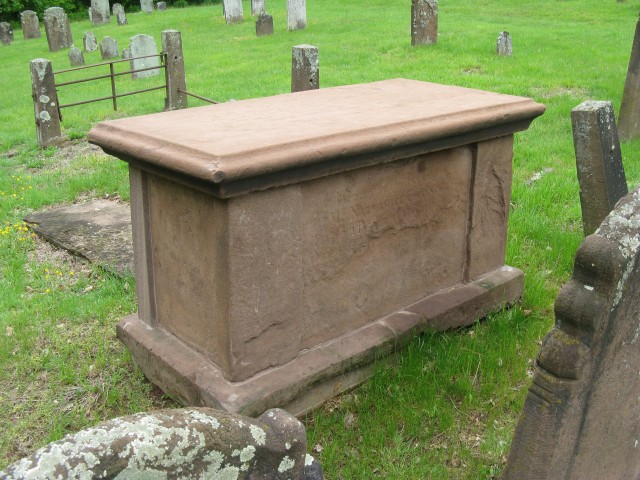 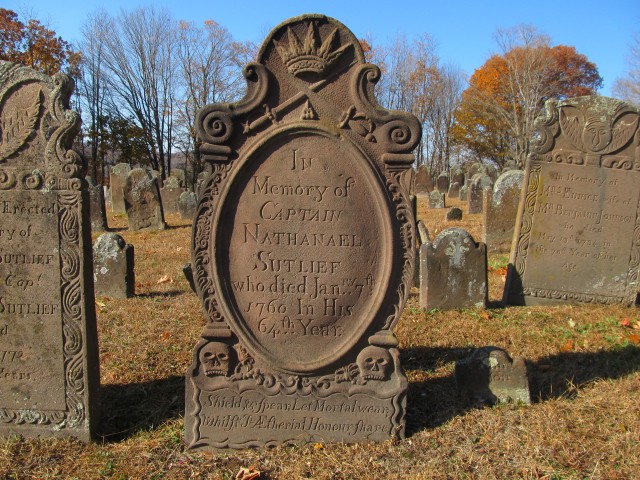 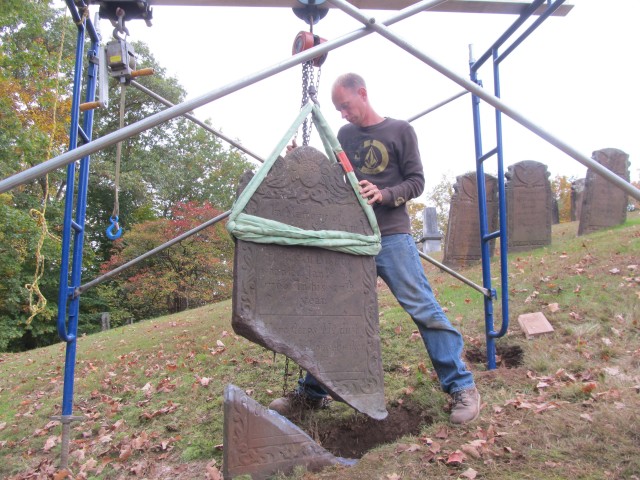 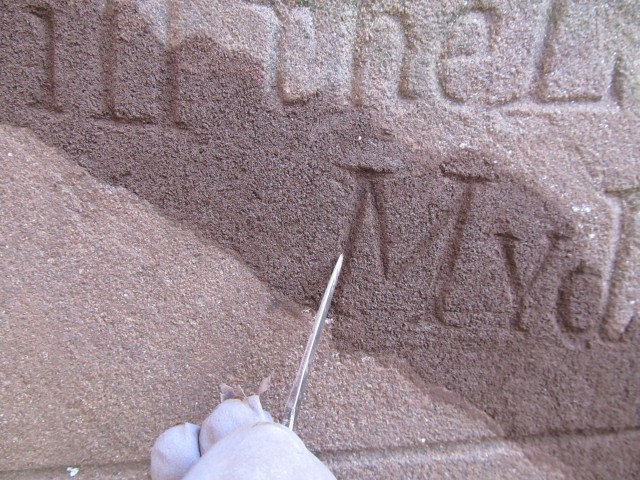 The settlers from Killingworth and Guilford settled Cockinchaug (Long Swamp), in 1669, renaming the community Durham in 1704. Old Durham Cemetery, a land parcel designated in 1703 for the use as a burial ground, is a rural, 18th – 19th century site that extends up a steep hillside beginning at Main Street and Old Cemetery Road. The majority of the colonial gravestones consist of Connecticut Valley sandstone locally extracted from one of the three historic quarries. Larger blocks for monuments fabricated in the 19th century likely were quarried in nearby Portland, CT. There are also numerous marble markers and a single slate.

The cemetery has excellent examples of colonial era Connecticut Valley Ornamental Style markers. Many of the single slab stones mark the burials of notable founding families. Additionally, the cemetery contains several monuments and an above grade box crypt for Reverend Nathaniel Chauncey Jr., Durham’s first minister. Reverend Chauncey was also the first student to graduate from the Collegiate School in Saybrook, CT. The Collegiate School was chartered in 1701 for youth to be educated for “employment in Church & Civil State.” The school relocated to New Haven, CT in 1716 and was renamed Yale College in 1718. See Reverend Chauncey Crypt for more information.

Markers of additional national significance are two sandstones commemorating Elias and Eunice Austin, parents of Moses Austin. Moses Austin was born in Durham in 1761 and later was granted permission to bring Anglo-American settlers in to then Spanish Texas. The cemetery also has a Native American marker: “A Indian Girl”, Ann Cornelius, which is set to the periphery of the site. Esther Beaumont, a Native American basket maker, is located in nearby Durham (Center), Cemetery.

The markers treated suffered from a wide variety of deterioration issues. The Connecticut Valley Sandstone markers, such as the Chauncey Box Crypt, endured years of weathering, organic growth, disaggregation of the stone, spalling, stone loss, missing blocks, and stone foundation failures. Marble markers such as the General Wadsworth Monument had soiling, sugaring of the surfaces from acid rain exposure, loss of crystalline cohesion, breaks, cracks and unstable and failed foundations.